TimberNook was designed as the vehicle to get children outdoors in sensory-rich experiences that inspire, restore, and challenge the mind and the body. We strive to be the “living example” of what real, authentic outdoor play should look like.

AN EXPERIMENT THAT BECOMES A JOURNEY

TimberNook began as an experiment in pediatric occupational therapist Angela Hanscom’s own backyard.
She was hoping to make a difference in her local community. Now, her experiment has become an
amazing journey that is making a difference for children in communities across the world. 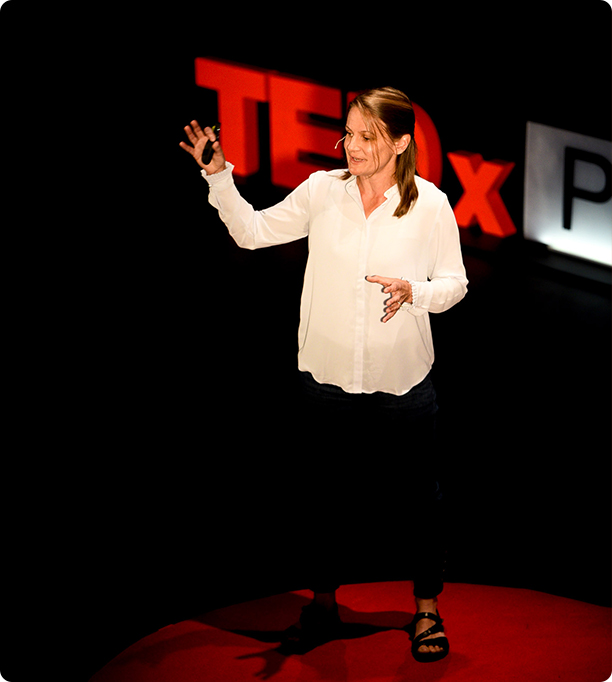 Angela Hanscom is a pediatric occupational therapist and the founder of TimberNook–an award-winning nature-based program that has gained international popularity. She holds a master’s degree in occupational therapy and an undergraduate degree in kinesiology (the study of movement) with a concentration in health fitness. Angela’s book, Balanced & Barefoot: How Unrestricted Outdoor Play Makes for Strong, Confident, and Capable Children (New Harbinger Press, 2016), discusses the effects of restricted movement and lack of outdoor playtime on overall sensory and motor development in children.

Angela keynotes conferences and conducts workshops for parents, educators, and clinicians all over the world. Awarded a “Hometown Hero” by Glamour magazine for her innovative work with TimberNook, Hanscom has also been a frequent contributor to The Washington Post’s “Answer Sheet” column, and has been featured on the NPR education blogs, Times of India, Children & Nature Network, Jerusalem Post, Huffington Post, CBC radio, DIY Network Blog, Johnson & Johnson TEDx, and MindShift. Angela also sits on the board for the International Association of Nature Pedagogy.

When Angela is not speaking about nature’s therapeutic benefits or training new TimberNook providers, she enjoys spending time with her husband Paul and three children in the rural town of Barrington, New Hampshire, where the concept behind TimberNook and Balanced & Barefoot were first born.

TimberNook began as an experiment in pediatric occupational therapist Angela Hanscom’s own backyard. She was hoping to make a difference in her local community. Now, her experiment has become an amazing journey that is making a difference for children in communities across the world.

Author of Balanced and Barefoot, Angela Hanscom frequently attends Speaking Engagements around the world to speak on how outdoor play makes for strong, confident, and capable children. 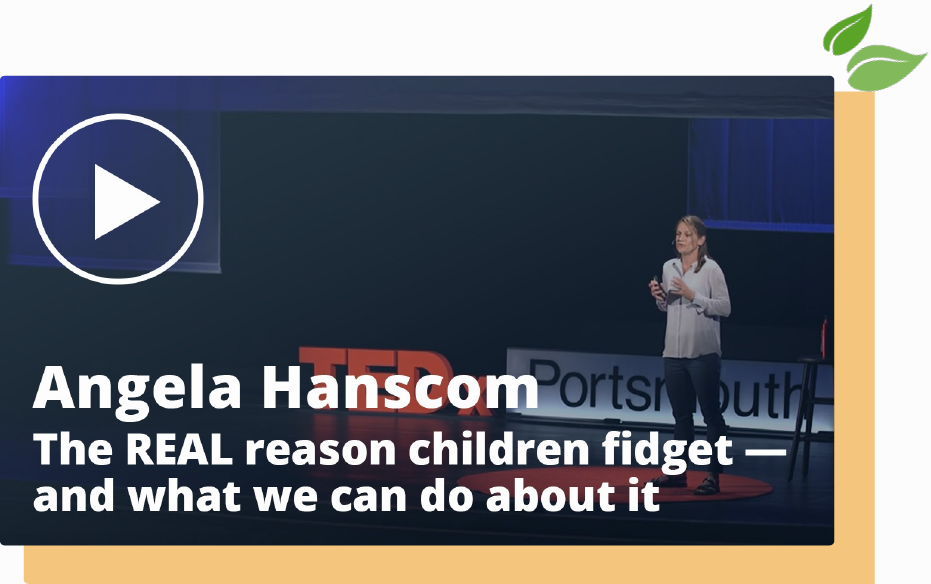 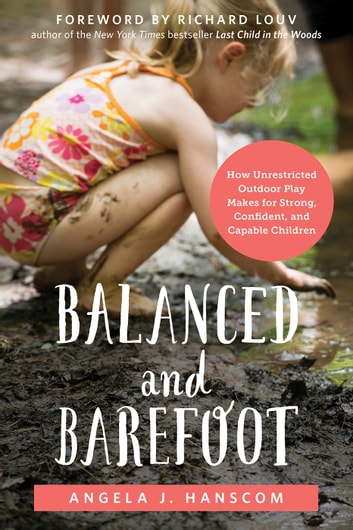 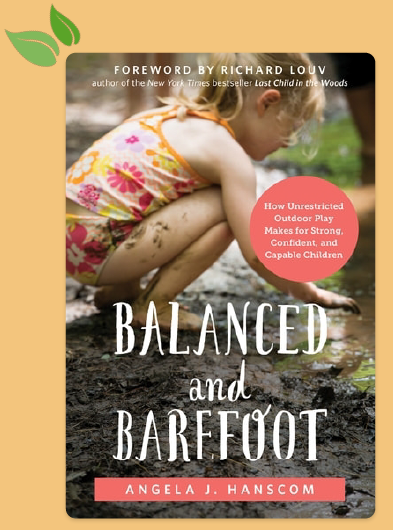 Today’s kids have adopted sedentary lifestyles filled with television, video games, and computer screens. But more and more, studies show that children need “rough and tumble” outdoor play in order to develop their sensory, motor, and executive functions. Disturbingly, a lack of movement has been shown to lead to a number of health and cognitive difficulties, such as attention deficit/hyperactivity disorder (ADHD), emotion regulation and sensory processing issues, and aggressiveness at school recess break. So, how can you ensure your child is fully engaging their body, mind, and all of their senses? Using the same philosophy that lies at the heart of her popular TimberNook program—that nature is the ultimate sensory experience, and that psychological and physical health improves for children when they spend time outside on a regular basis—author Angela Hanscom offers several strategies to help your child thrive, even if you live in an urban environment.

“Angela Hanscom Is a Powerful Voice For Balance”

– Richard Louv, Author of Last Child in the Woods.

TimberNook is made up of hundreds of passionate providers who are dedicated to creating fun and engaging experiences for kids. Our management team crafts experiences and provides training to our providers, bringing TimberNook around the world.

Our entire team believes that at the heart of TimberNook programming is the philosophy that children flourish when given the time and space to play in sensory-rich, experiential learning environments.

Learn more about our approach and philosophy 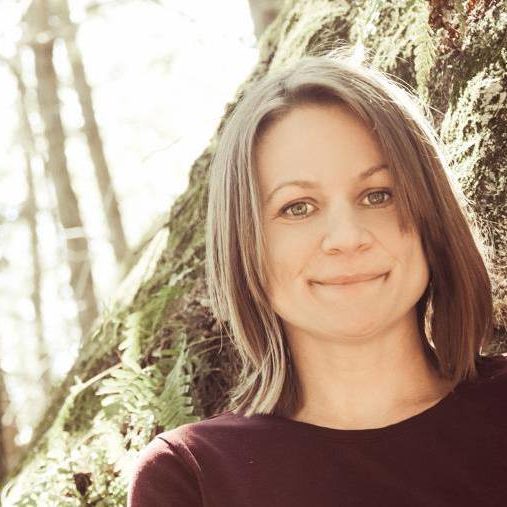 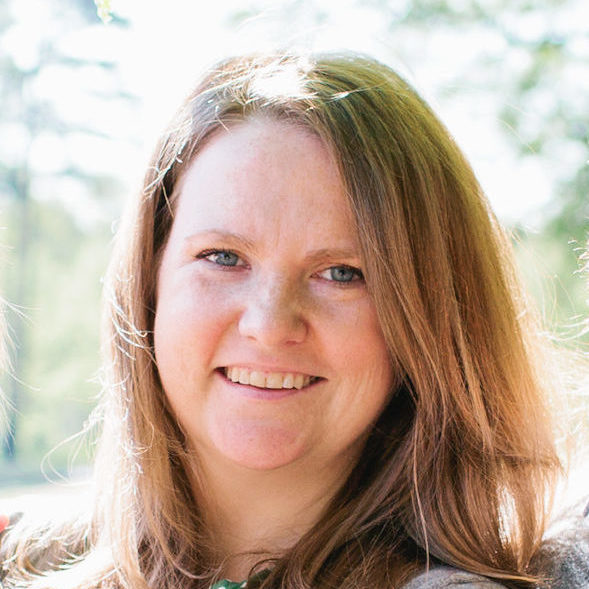 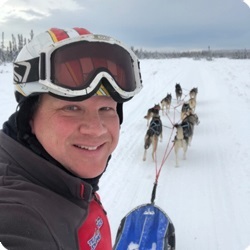 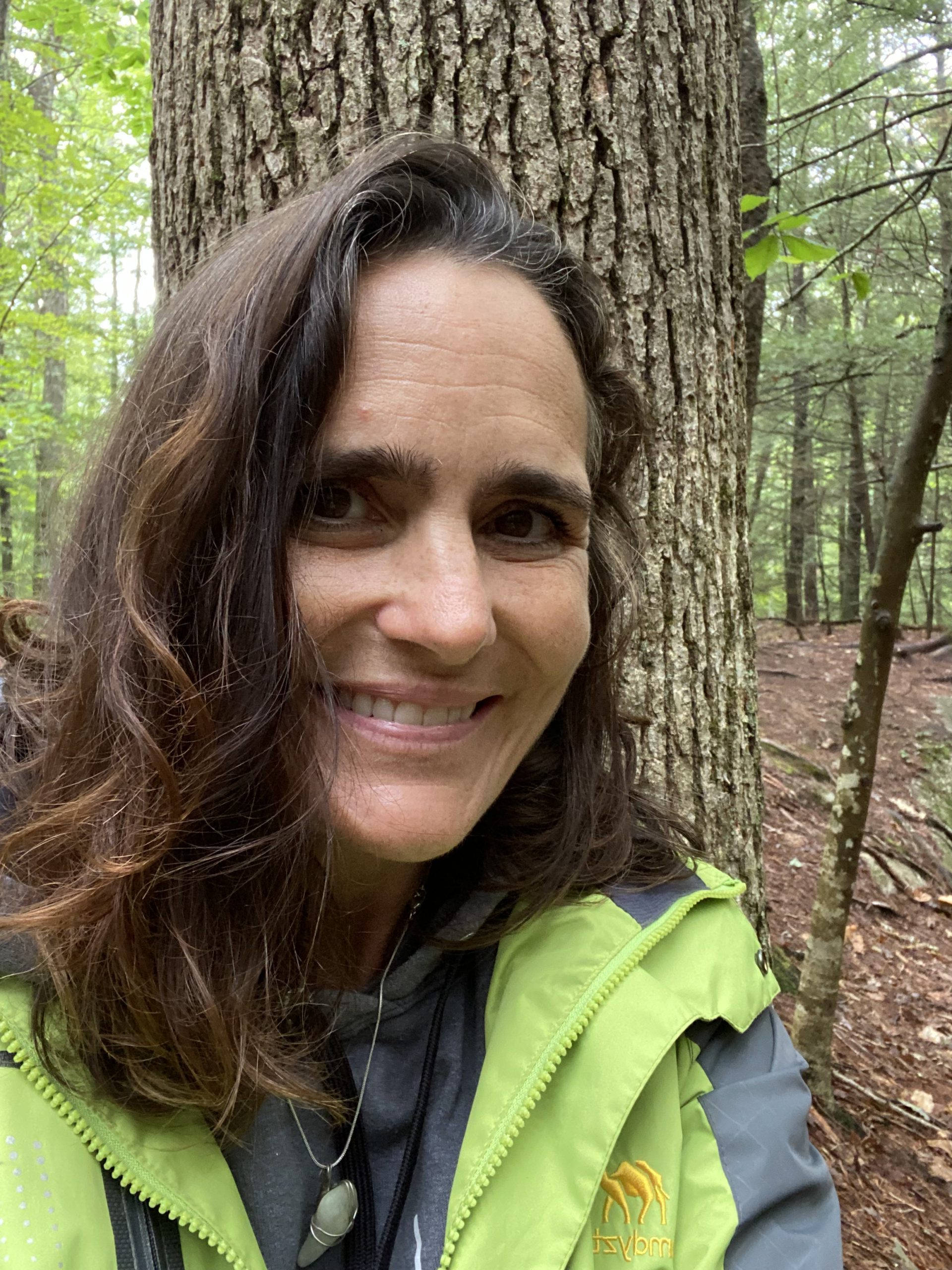 Angie is a pediatric occupational therapist and founder of TimberNook. She is also the author of Balanced and Barefoot: How Unrestricted Outdoor Play Makes for Strong, Confident, and Capable Children. Awarded a “Hometown Hero” by Glamour magazine for her innovative work with TimberNook, Hanscom has also been a frequent contributor to The Washington Post, and was featured on the NPR education blog, Children & Nature Network, Edutopia, and Johnson & Johnson TEDx Talks. ​In her spare time, she enjoys sharing her life and love with her three children and husband in rural New Hampshire.

Kate Davis is a pediatric occupational therapist with 14 years of experience in a variety of settings including home, clinics, and schools. She received her doctorate from Washington University in St Louis School of Medicine, and also holds a degree in psychology and neuroscience from Carthage College. Kate has dedicated her career to serving children (primarily infants/toddlers) and their families and specializes in treating neuromuscular conditions such as cerebral palsy and children with medical complexities. The bulk of her clinical experience has been providing therapy in-home, in the city of Chicago, and managing a pediatric clinic there. After having two children of her own, she moved out of the city to her own plot of wild land where she enjoys watching her children run through puddles, climb trees, and catch toads. She currently owns her own practice where she and her team of OT’s provide home based (and soon nature-based) therapy sessions to their community. The practice is focused on bringing wellness programming to the pediatric setting. She is very excited to offer TimberNook programming to her neck of the woods. 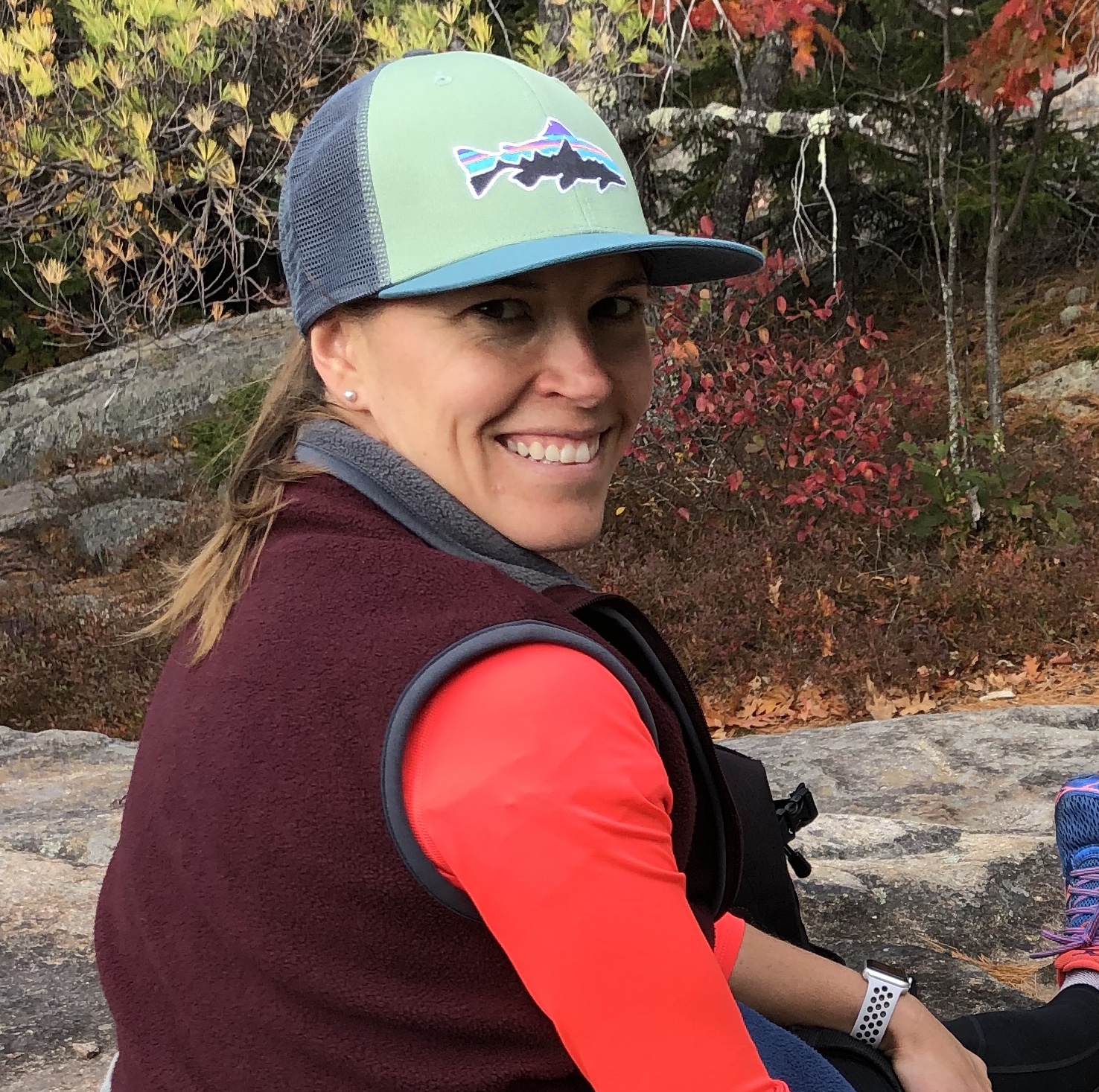 Shauna earned her Masters degree in elementary education from UNH. She has spent the majority of her life educating children ranging from infants to adolescents. She previously taught 3rd grade and joined Timbernook in 2019. Shauna’s enthusiasm for education and the outdoors drives her passion for the Timbernook experience. In her off time, Shauna loves to stay physically active and spend time with her husband, son, 3 daughters and dog.

Steve has been with TimberNook since 2010 as a provider, curriculum writer, photographer, and is now part of the training team. He holds an M.S. in Wildlife Ecology from the University of Maine and an M.Ed. in Science Education from Plymouth State University. His previous work experiences include marine mammal research, museum and outdoor education, wildlife and landscape photography, and substitute teaching. Steve’s hobbies and interests include just about any outdoor activity or sport, especially dogsledding and softball with his two daughters.

Carmen is a pediatric occupational therapist with over 27 years of experience working with children in public schools.  Through the years, Carmen searched for ways to better foster children’s natural development.  She discovered TimberNook in 2017 and became a TimberNook Provider in 2018.  She continues to be inspired and grateful to be able to support children grow, take on challenges, fail and try again, learn to express themselves, and so much more through outdoor play!  Carmen has two grown sons and loves spending time in the outdoors hiking, biking, running, and kayaking.

Angela Hanscom had no intention of returning to work after her second daughter, Charlotte, was born. After six years of working as a pediatric occupational therapist in traditional settings (i.e., hospitals, schools, and outpatient clinics), Hanscom was ready to stay home and raise her two daughters. But that didn’t stop her from observing the world through a therapist’s lens.

Angela kept noticing that more and more children seemed to have poor balance and coordination, were weaker than they should be, and had trouble thinking in creative ways. Many of her children’s friends needed occupational therapy–something that was once considered a rarity. At the same time, it appeared that almost none of the kids in their circle were playing outdoors anymore. This growing trend both fascinated and scared Angela.

Out of curiosity, Angela started observing local schools and found results that would later rattle the country and even the world. Her impression had been correct. Children were noticeably weaker and their balance systems were significantly underdeveloped as compared with the children of previous generations. These physical problems also were manifesting in school. Teachers were complaining that children were getting more aggressive on the playground, kids were falling out of their seats in school on a frequent basis, and drastic modifications had to be made to the classrooms in order for children to pay attention. 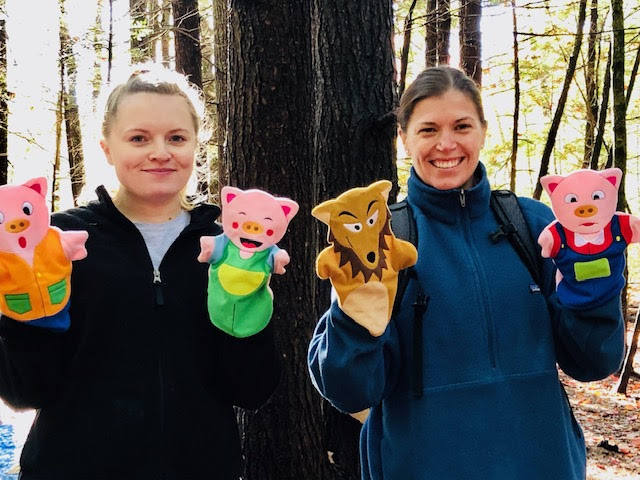 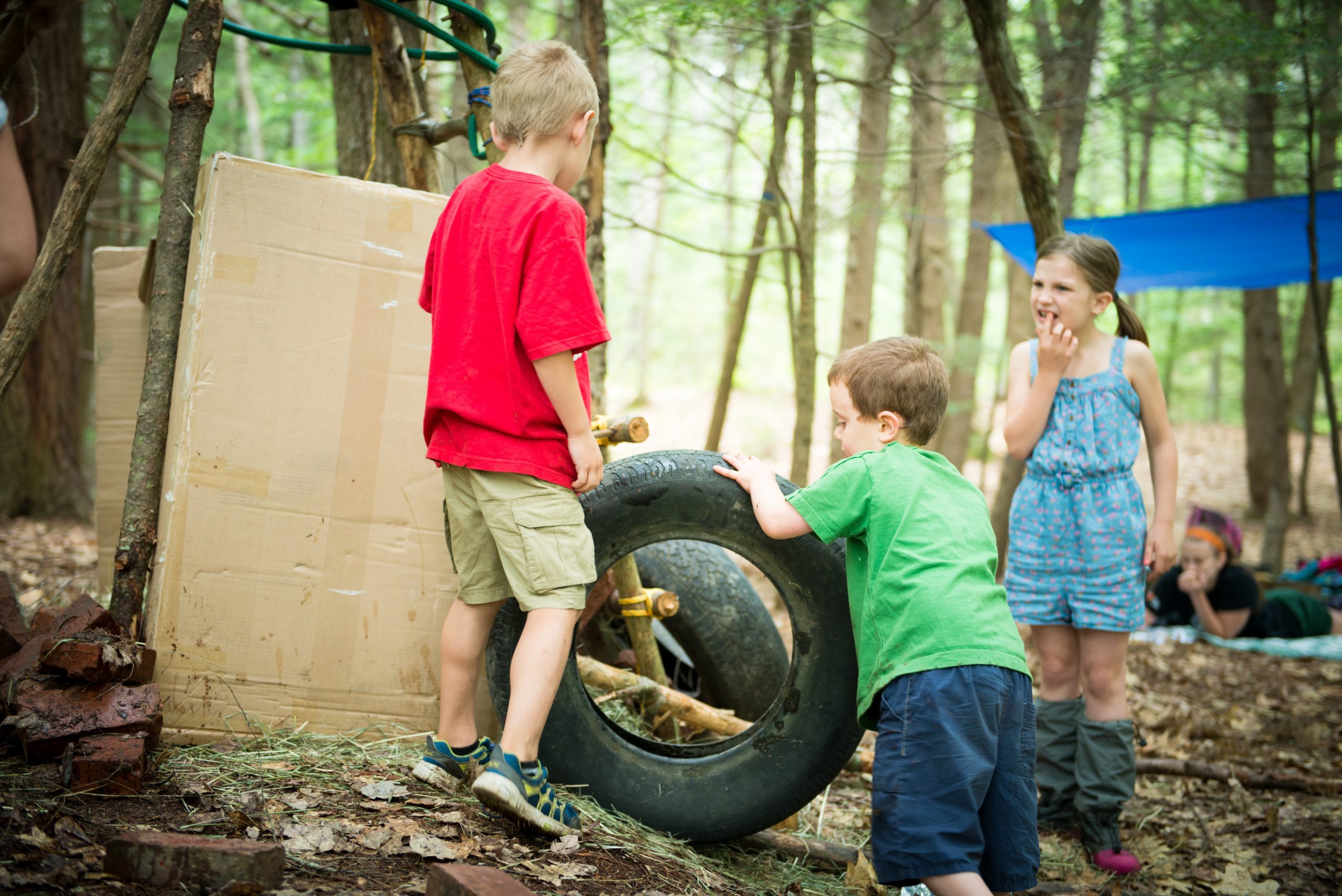 Putting together her observations, Angela finally understood. Children weren’t spending enough time playing outdoors and it was starting to affect their senses and quality of life.

Using her occupational therapy skill-set and ability to analyze activities for their therapeutic value, combined with her background in kinesiology–Angela set out to create a program that placed children outdoors while enhancing and fostering child development. TimberNook was born. In its first summer, TimberNook offered three, one-week camp sessions. They were all filled to capacity with 20 children each.

After just one week, the kids who attended the camp already showed signs of improvement. Some became more social, and others showed less anxiety when trying new activities or getting dirty.

A wildlife ecologist and a teacher wrote to Hanscom, expressing interest in the program. Parents started contacting her to sign up for future camps. The next summer’s program was inevitable.

Fast forward to the fourth year, and TimberNook summer camps filled up in a just one minute in early February. Parents were calling and begging for more sessions and camps. Local pediatric therapists were coming to observe the program and asking if they could replicate this unique concept and idea. It became so popular, that Angela decided to license TimberNook as a program.

Now in its eighth year, TimberNook has gained international attention. The programs are spreading to New Zealand, Australia, the UK, Canada, and across the United States as people are looking for a way to get children outdoors and enhancing their neurological systems in the most natural of ways.

TimberNook was never planned. Starting out as an experiment of sorts, it is now reaching children on both sides of the world. This is just the beginning of an amazing journey. 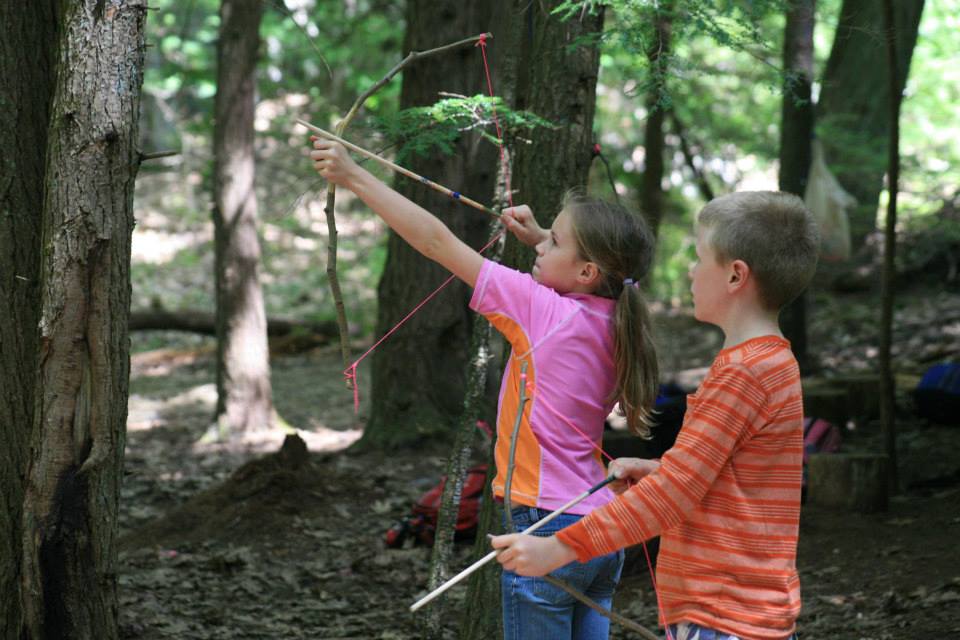 AROUND THE WORLD AND GROWING

TimberNook continues to grow with thousands of programs across 4 different countries that’s a lot of smiles.

Help spread the TimberNook program and gain access to program materials and support by becoming a
Provider or getting your school certified.